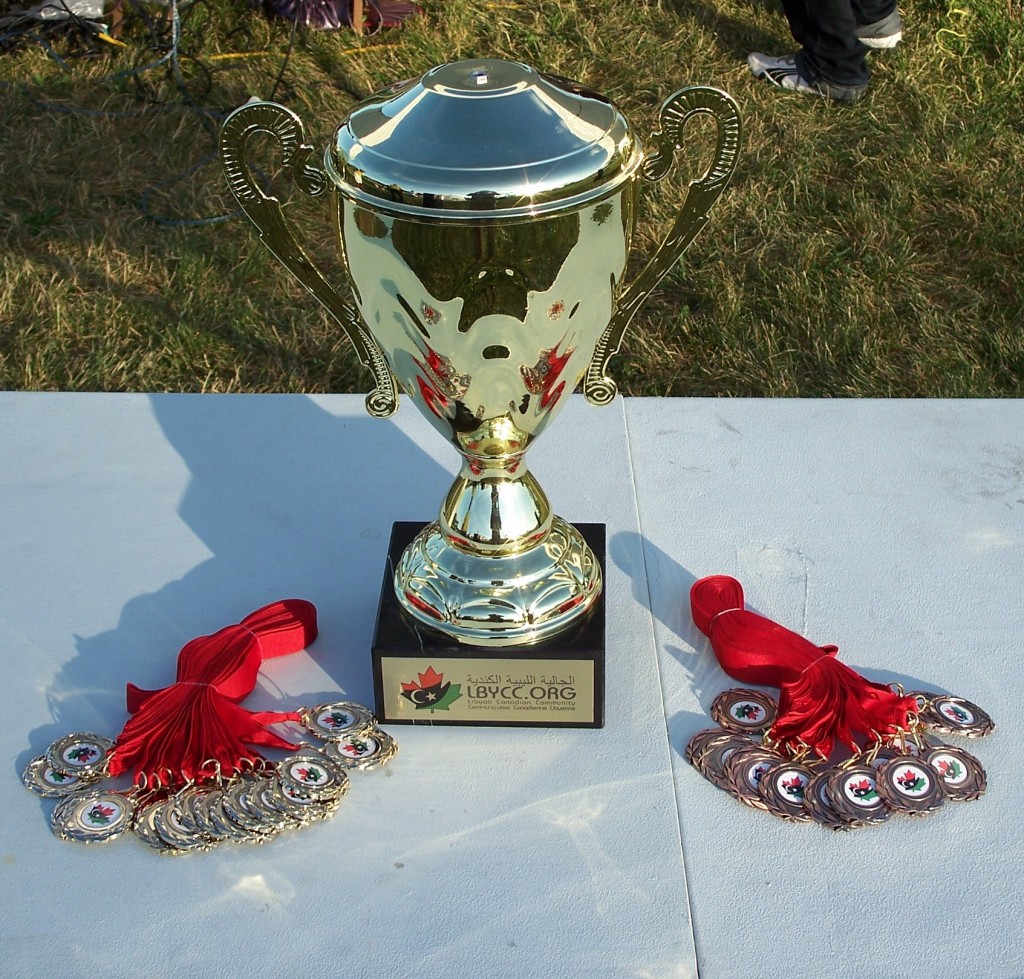 The annual Pan African soccer tournament was a resounding success! This year the tournament was held on Sunday June 19th at Brewers Park opposite Carlton University. We had a good turnout of people in honor of Fathers Day to have fun and participate in the festivities. On the field the competition consisted of six strong teams that represented the various nationalities and cultures of the Ottawa region. The teams were Liberia, Brazil, Haiti, Madagascar, Bosnia, and Libya. This year the tournament was sponsored by Libya who donated a beautiful new trophy for the top prize.

The tournament kicked off promptly at noon under beautiful sunny skies and perfect wind conditions. Spectators and family members of the players were treated to a series of matches that saw several exciting goals scored. Teams played hard resulting in several contentious episodes between rival sides but the refs managed the games well and everyone kept their cool. Each team played two qualifying games after which several strong teams emerged as possible contenders for the cup. After the qualifiers Brazil, Haiti, Libya, and Madagascar moved on while Liberia and Bosnia were knocked out.
For the first game of the semi-final round the skilled Brazilians went up against a determined Madagascar team in perhaps the most exciting game of the day. When it was over Brazil emerged as the victor with a 2 to 1 score. The second semi-final match saw the strong willed Libyans go up against the speedy Haitian team. Libya fought hard but the Haitians were just too quick for them. It was a match that was fought hard to the very end but with several injured players Libya’s will power just couldn’t carry them over the top. Haiti moved on with a 1 to nil score.
Finally with the time approaching 9:00 pm and the sun fading fast the championship match was kicked off. The well rested Brazil team were first to put the ball past the Haitian goalkeeper but by half time the Haitians had equalized the score. In the second half the Brazilians turned up the heat and the Haitians couldn’t keep up. The speedy Brazilian forwards out ran the Haitian defenders time after time but couldn’t put the ball in the net. Finally with time winding down they managed to go up 2 goals to 1 and held on for the win. The jubilant Brazilians are the 2011 Pan Afrikan Soccer Tournament winners!

On behalf of the organizers and participants we would like to thank the Libyan Canadian Community Organization for their generous donation of the trophy and medals. We would like to also thank all the volunteers who worked very hard to make this tournament possible. Thanks to DJ Phoenix for providing the musical entertainment. We look forward to a bigger and better tournament next year with great anticipation.